Geology (in Greek, Geo means Earth, Logos means Science) is a branch of science that deals with Earth study. It is also known as earth science. This is a very simple definition for something so complex. Geology involves studying the materials that make up the earth, the features, and structures found on Earth as well as the processes that act upon them. Geology also deals with the study of the history of all life that’s ever lived on or is living on the earth now. Studying how life and our planet have changed over time is an important part of geology.

in other words, is the scientific study of the Earth, including the materials that it is made of, the physical and chemical processes that occur on its surface and in its interior, and the history of the planet and its life forms.

Geology has been of interest to humans as far back as ancient Egyptian history, where the enormous amount of stone material worked and moved, partly over long distances, during ancient Egyptian history still remains admirable if one considers that it was mined during a time interval of almost three thousand years. Stone was the most important raw material used during the different periods of Pharaonic Egypt until Greco-Roman and Arab times.

In ancient Greece (the 4th century). Aristotle was one of the first people to make observations about the earth. This was also the first time that scientists and philosophers noted a difference between rocks and minerals. The Romans became very adept at mining certain rocks for use in building their empire, especially marble.

In the 17th century, fossils were being used as a way to understand what happened to the earth over time. These fossils played a key role in the debate about the age of Earth. For a while and even in some cases today, theologians and scientists have been at odds about the age of Earth. Theologians believed Earth was only about 6,000 years old while the scientists believed it to be much older.

In the 18th century, scientists started focusing on minerals and mineral ores since mining was an important part of global economies. During this century, two main theories came forward explaining some of the physical features of the earth. One theory believed that all rocks were deposited by the oceans during flooding events. The second theory believed that some rocks were formed through heat or fire.

This debate continued into the 19th century until James Hutton proved that some rocks are formed by volcanic (heat & fire) processes and others are formed by sedimentation. Hutton also explained that all the processes we see going on today, are the same processes that happened in the geologic past and that they occurred very slowly.

In other words, the erosion that is occurring to our mountains today is the same process that eroded mountains in the past. This theory became known as Uniformitarianism, which simply stated says ‘the present is the key to the past.’ James Hutton is known as the Father of Modern Geology.

Once Uniformitarianism was accepted by the scientific community, all the geologic pieces started to fall into place. Geologists began to understand how fossils could help them date the earth and different rock layers called strata. The fossils acted as markers that allowed geologists to place them in order of occurrence, allowed them to correlate rock strata found over great distances, and helped them understand the changes in life over time and the changes in Earth’s environment through time.

The next big leap for geology happened in the early 1900s. A scientist, Alfred Wegener proposed a theory called Continental Drift. Wegener suggested that the continents moved around on the surface of the earth and came together to form a supercontinent known as Pangaea. 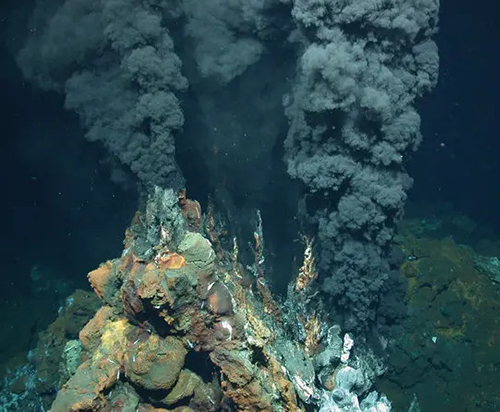 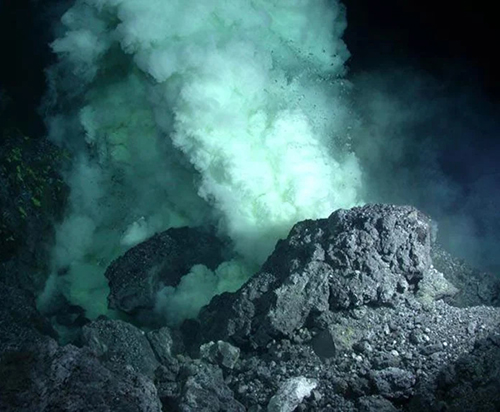 He cited several pieces of evidence to prove his theory, the continents all fit together like puzzle pieces, the same rock unit or fossil could be found on both sides of an ocean and similar features such as mountains could be found on continents when they were all together.

He suggested that continents ‘floated’ or ‘drifted’ to their positions. However, he could not explain how this happened. The scientific community rejected his theory until the 1940s. The technology boom associated with WWII brought advances in sonar and radar. In 1947, two geologists mapped the ocean floor, which revealed evidence that oceanic crust is created at mid-ocean ridges.

This became known as seafloor spreading. These mid-ocean ridges, are found on the bottom of the oceans and are major cracks or vents in oceanic crust. Magma from the mantle pushes its way up through the cracks (think of squeezing toothpaste from its tube). As it does this, it pushes the existing crust causing continents to move around. This led to the Theory of Plate Tectonics, which is based on the idea that Earth is broken into tectonic plates and these plates move in response to seafloor spreading.

Some Branches of Geology

Different branches of geology study one particular part of the earth. Since all of the branches are connected, specialists work together to answer complicated questions.

It is a subfield of inorganic chemistry, which is concerned with the properties of all the elements in the periodic table and their compounds. Inorganic chemistry investigates the characteristics of substances that are not organic, such as nonliving matter and minerals found in the Earth’s crust.

These properties together provide a record of the mechanisms active during sediment transportation and deposition which allows the interpretation of the environmental conditions that produced a sediment deposit, either in modern settings or in the geological record.

Another Classification for Geology

Physical geology deals with the Solar system, the Earth’s origin, age, internal constitution, weathering, mass-wasting, and geological work of river, lake, glacier, wind, sea, and groundwater. It also deals with the Volcanoes – their types & distribution, geological effects, and products; earthquakes -their distribution, causes, and effects. Physical Geology also projects the elementary ideas about the origin of geo synclines, the concept of isostasy and mountain building (Orogeny), continental drift, seafloor spreading, and plate tectonics. This subject gives the foundation for all other earth science branches.

Historical geology is the discipline that uses the principles and techniques of geology to reconstruct and understand the past geological history of Earth. It is a major branch that deals with the records of events of earth’s history and with the historical sequence and evolution of plants and animals of past ages. Its object is to arrange the events of earth’s history in the regular chronological order of their occurrence and to interpret their significance. Fortunately, the historical records are preserved in the layered rocks of the crust. Historical Geology is, sometimes called Strati graphical Geology. It brings together all collated details of other Branches of Geology like Paleontology, petrology, and structural geology, pertaining to age-wise correlated beds.

Geomorphology is the scientific study of the origin and evolution of landforms and landscapes created by physical, chemical, or biological processes operating at or near the Earth’s surface. It is concerned with the internal geologic processes of the earth’s crust, such as tectonic activity and volcanism that constructs new landforms, as well as externally driven forces of wind, water, waves, and glacial ice that modify such landforms. It is closely related to soil science, hydrology, geology, and environmental science. This has the potential for applications in environmental / development planning, transport, human settlements, mining and hydrological sectors, hospitality, and tourism.

Geomorphology also focuses on the investigation of surface processes and the way these processes create small-scale landforms.

Which deals with the Davisian Erosion Cycles / peneplain (Footprints of Darwinian Evolution).

The study of the processes responsible for landform development.

Planetary geomorphology is yet another branch of geomorphology. It involves the study of landforms on planets and their satellites. It is a modern branch. Most of the surface processes on other planets and their satellites depend on various factors like mean distance from the Sun, annual receipt of solar energy, rotational period, and on the nature of the planetary atmospheric conditions. Observed geomorphic processes include weathering, wind activity, fluvial activity, glacial activity, and mass wasting.

Fluvial geomorphology is the scientific study of the forms and functions of streams and the interaction between streams and the landscapes that evolve around them. Fluvial geomorphology is an applied science. It is mainly devoted to understand the development of rivers, both in their natural setting as well as on how they respond to the anthropogenic changes imposed within a watershed.

The scientific study of the morphological development and evolution of the coasts. Coastal landforms are developed under the influence of winds, waves, currents, and sea-level changes. This branch focuses on the physical processes and their responses in the coastal zone. It is also an applied science. Sustainable management of coastal resources requires a detailed knowledge on coastal zones.

The tropics are a typical climatic region. They are characterized by particular climates that may be dry or humid. The tropics can be divided into two primary units based on annual rainfall, the humid tropics and the arid topics. These are the belts of low latitudes and high temperature. Like climate, landforms and operating geomorphic processes are not the same across the tropics. The tropics are an assemblage of active tectonic belts, ancient cratons, alluvial valleys and subsiding deltas. Geomorphology in the tropics provides twin opportunities to discover new facts and to apply such information to manage the environment for a sustainable future. Tropical geomorphology has a tendency to look forward rather than look back exclusively at past landforms. Relative to temperate zones, the tropics contain areas of high temperatures, high rainfall intensities and high evapotranspiration, all of which are climatic features relevant for surface processes.

Concerned principally with the role of glacial ice in landform and landscape evolution. It is the scientific study of the processes, landscapes, and landforms produced by ice sheets, valley glaciers, and other ice masses on the surface of the Earth. These processes include understanding how ice masses move, and how glacial ice erodes, transports, and deposits sediment. This subject is much useful to the planetary geologists who are interested in understanding the evolution and history of the surface of nearby planets in our solar system. It has been reported that the planet Mars is covered with permafrost, where the soil temperatures are permanently below the freezing point of water. Bitter cold temperatures dominate the Martian equatorial regions, with an annual-mean temperature of the soil colder than -50 deg C, and colder still at middle and high latitudes. Therefore, any water present in the Martian soil must be in the form of ice. Glacial deposits form characteristic flow features that indicate thick piles of water ice in a slow viscous motion.

The study of the role of climate in shaping landforms and the earth-surface processes. An approach used in climatic geomorphology is to study relict landforms to infer about the ancient climates. It is mainly concerned about the past climates. Climatic geomorphology identifies climatic factors such as the intensity, frequency and duration of precipitation, frost intensity, direction and power of wind, and it explains the development of landscapes under different climatic conditions. Since landscape features in one region might have evolved under certain specific climate, different from that of today, studying climatologically distinct regions of the past might help to understand the present-day landscapes.